DDoS attacks are becoming more and more frequent in today's world, with any average person being able to download or purchase such tools from online, public forums. You may have heard about the self proclaimed hacktivist group "Anonymous" and their infamous take-downs of websites such as MasterCard, PayPal and The Bank of America. Well, these websites were taken offline for a period of time by an attack known as "DDoS", but what is DDoS?

DDoS stands for Distributed Denial of Service. DDoS attacks work by collecting multiple infected machines or servers with certain scripts, or malware, intended to send data from the infected server or home connection to a victims. This means the attacker can overload the victim connection, by flooding it with loads and loads of dummy data, eventually causing the victim connection to overload, "knocking" the connection offline and making it unresponsive. See the below diagram for an example of this: 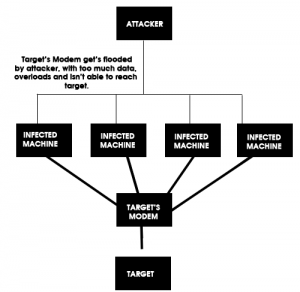 As you can see from the above diagram, the attacker sends a command to the servers/PCs that are under his/her control, which then send the dummy data to the victim connection and overloads the connection, making it hard or impossible for the victim's users to communicate with the victim. There's also what is known as "DoS" which is often not as strong as a DDoS attack, but if the attacker is using a server with a strong connection, this attack can still be devastating. One thing to note would be that there are companies which fight to prevent this exact attack and that is why you never see big sites like eBay, YouTube and Google go down. With this huge scare about "hackers being able to take down the internet", it's baloney. The only way it would be possible, is if the data-centers were to be physically blown up, not DDoS attacks via the internet. If you wish to know more on this subject, visit Wikipedia's page on DDoS